The project, Richard Serra: Animal habitats live and stuffed… Roma, La Salita, 1966 is dedicated to the reconstruction, through photographic and archival documents, of a legendary, yet largely unknown exhibition: Richard Serra’s first solo show, which inaugurated in Rome at Galleria La Salita on 24 May 1966. 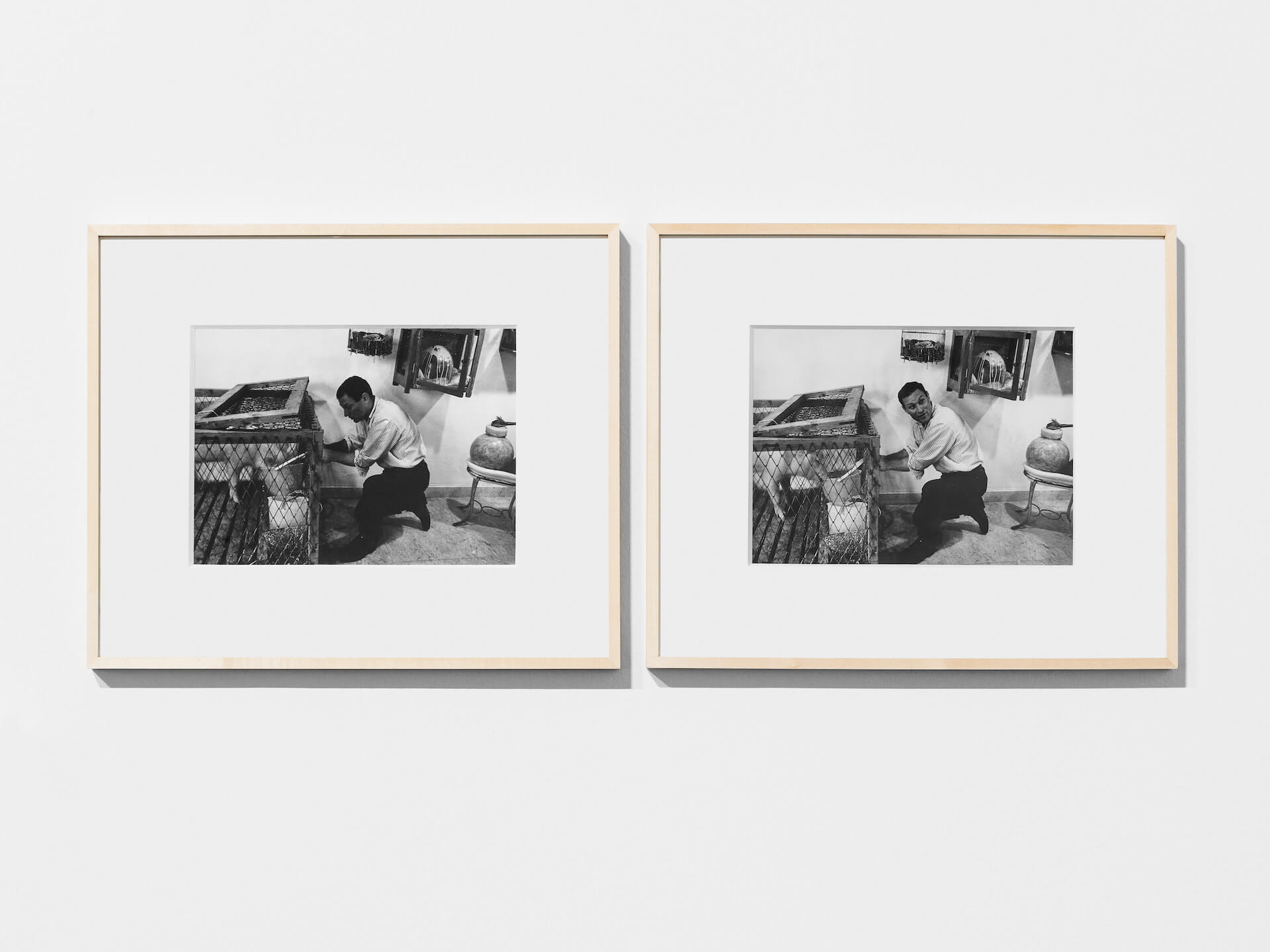 After having studied painting at the Yale School of Art, Richard Serra took off for Europe on a study grant, stopping in Paris first. Then, in 1965, he moved to Florence with artist Nancy Graves, his wife at the time. During this period he traveled to North Africa and other parts of Southern Europe: in Madrid he saw Diego Velásquez’s Las Meninas (ca. 1656), an experience which marked a rupture in his relationship with pictorial space; in Florence he visited the Museo de La Specola and became interested in the history of menageries and zoological gardens in the city, the last of which had been destroyed by the flood which devastated Florence in November, 1966.

While in Italy he embarked on a series of experiments that equally questioned both an illusionistic approach to the pictorial space and the use of the modernist “grid”. “It’s then that I decided to make cages,” Serra would later explain to critic Hal Foster, “to stuff them with material, to use live animals, to do anything to get away from my education…”. In 1966, upon the invitation of gallerist Gian Tomaso Liverani to exhibit in his space in Rome, Serra brought nineteen pieces including cages—containing live and stuffed animals—and a variety of assemblages. “It was barnyard-assemblage-Surrealism”, Serra later recalled. “A lot of things were in the air: Rauschenberg, Lucas Samaras, Ed Kienholz, [and] many others dealing with assemblage”.

The exhibition conveys the young American artist’s 1966 solo show in all its immediacy and expressive freedom, thanks to the retrieval of archival and photographic documentation—including a series of prints from the documentation specially produced by the Roman agency DUfoto and a video drawn from a vintage newsreel. The qualities of the show immediately attracted the attention of the local art scene: the emerging protagonists of the Italian neo-Avant-Garde visited and discussed Animal habitats…The show drew numerous controversies and resulted in a legal battle over the sale of animals as art objects. Liverani responded to the report invoking the notion of “the freedom [of the artist] to express his thinking with any means he feels are most effective”.

This same freedom and fearlessness, presented to the visitor in the form of fragments, is visible in the context of this monographic focus. This study of an exhibition almost takes the form of a storyboard for a film, in which images and written testimonies run in parallel to conjure up the vision of a seminal moment in the history of art and of the exhibition as a medium.

RICHARD SERRA (San Francisco, 1938) is an artist living and working in New York City and North Fork, Long Island. In 1961 he graduated with a degree in English Literature from the University of California Santa Barbara. The artist supported himself through his studies working at a local steel mill. In 1961 he enrolled at Yale School of Art where he studied painting until 1964. While at Yale he collaborated with Joseph Albers on the book The Interaction of Color (1963). During the same years he came into contact with artists such as Philip Guston, Robert Rauschenberg, Ad Reinhardt and Frank Stella. In 1964, after graduating, he moved to Paris and then, in 1965, to Florence. In May 1966 he opened his first solo exhibition at Galleria La Salita in Rome. After returning to the United States, he settled in New York, where he frequented, among others, Carl Andre, Walter De Maria, Eva Hesse, Sol LeWitt and Robert Smithson. In 1966, Serra also worked on his first sculptures using materials such as fiberglass and rubber and, starting in 1968, he executed a series of works in which molten lead was splashed or cast into the junctures between floor and wall. These and other works, characterized by an approach to sculpture as a phenomenological experience—of gravity, space and time—are exhibited in 1969 in his first New York solo show at Leo Castelli. He also experimented with film and video and starting in the 1970s he began to produce monumental steel sculptures. These include Tilted Arc commissioned for Federal Plaza in New York (1981, removed in 1989) and The Matter of Time (1994-2005), eight sculptures installed at the Guggenheim Museum in Bilbao. Serra has repeatedly participated in international exhibitions such as documenta, the Venice Biennale and The Whitney Biennial. He has been featured in retrospective exhibitions at major art institutions and has received numerous lifetime achievement awards including the Golden Lion of the Venice Biennale (2001).