Egisto Macchi (1928-1992) was a versatile composer, immersed in all forms of music: applied (soundtracks for short films, documentaries and feature length films), pure, experimental and electronic, as well improvisation, musical theatre, library music, opera directing, orchestral and choral conducting, and the organization of musical events, with the perspective of a continuous research conducted in his own personal system of communicating vessels. 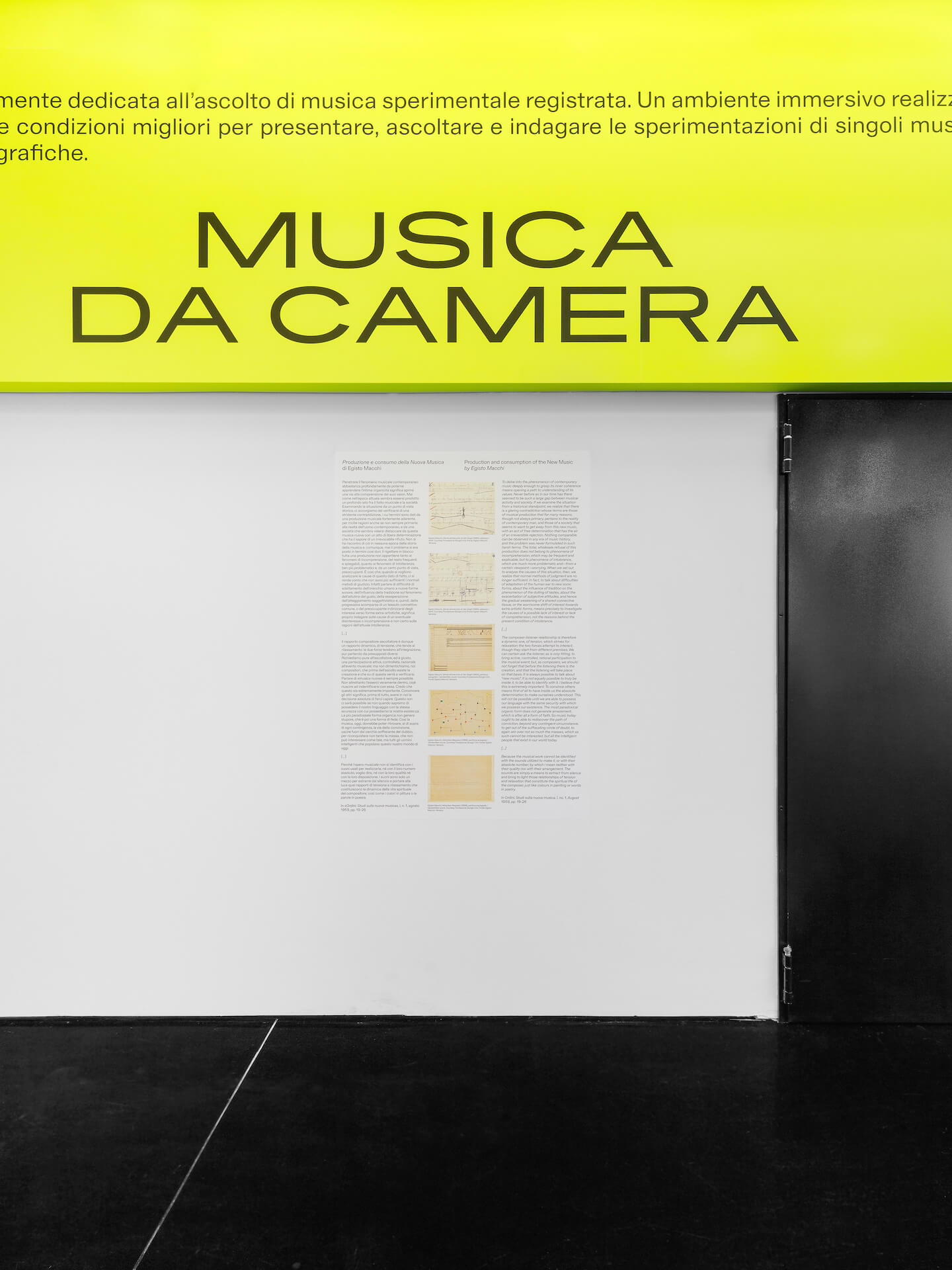 Thirty years after his death, Espressionismo sociale is the first institutional exhibition on Egisto Macchi, presented by MACRO in CHAMBER MUSIC, the museum’s listening room dedicated to recorded experimental music. The exhibition’s title, which comes from the album Pittura Moderna, aims to emphasise his multidisciplinary approach and the musical activism charged with sociological overtones which marked his research. The pieces selected for the exhibition trace his work and compositions for film and documentaries, his political commitment and his collaboration with the Gruppo di Improvvisazione Nuova Consonanza.

Born in Grosseto, Macchi grew up in Rome, where he studied a wide range of subjects (Medicine, Psychoacoustics, Literature, Physics with specialization in Electronics and Cybernetics) and where he spent his entire life, except for a short period of time spent in Palermo (1953-1955). In Palermo he met Nino Titone, with whom he would publish in 1959 the magazine Ordini, and with whom he founded the Gruppo Universitario per la Nuova Musica. These experiences led to the Settimane di Nuova Musica, six concert seasons during which the theatrical work Anno Domini, composed in 1962 with a libretto by Nino Titone, was performed in 1965. In 1955 he returned to Rome and came into contact with the world of visual arts, particularly with personalities like Emilio Vedova, with whom he worked on the project Crocifissione contemporanea. He then began to collaborate with the critic, gallerist and poet Mario Diacono, working together on the theatre piece A(lter) A(ction) (1966), with a libretto by Diacono based on writings of Antonin Artaud, and sets and costumes by Jannis Kounellis, and the ongoing research project Apocalypsis Altera (1988).

In 1962, after taking part in the creation and preparation of the first and only issue of the magazine Ordini. Studi sulla Nuova Musica, with Franco Evangelisti, Mario Bertoncini, Mauro Bortolotti, Domenico Guaccero and Daniele Paris, he founded the association for contemporary music Nuova Consonanza. In 1967 he became a member of the Gruppo di Improvvisazione Nuova Consonanza, established in Rome in 1964 by Franco Evangelisti, which Ennio Morricone was also a member of. The GINC was a real sonic gymnasium: from electronic improvisation to experimentation with percussion (glasses containing variable amounts of water, bird calls, plates, marimbas, vibraphones played with violin bows, and much more). The group’s experimentation was accompanied by research activities with Studio R7 – Laboratorio elettronico per la musica sperimentale, in which the members of Nuova Consonanza joined forces with figures like Paolo Ketoff, Giorgio Guiducci, Gino Marinuzzi.

Musical theatre was a fundamental part of Macchi’s compositional research, as demonstrated by the decision to establish with Domenico Guaccero and Sylvano Bussotti the Compagnia del Teatro musicale di Roma (1965-1970), and later found the Istituto di ricerca per il teatro musicale (I.R.T.E.M.) in 1984. In 1983 he created with Domenico Guaccero the Istituto della voce, with the aim of investigating vocal techniques—one of Macchi’s favourite subjects— and which remained active until his passing.

During his career as a composer he created soundtracks for various feature-length films, short films and television programs, and over 3000 documentaries, many of which addressed themes of civic, historical-political and social engagement. These include: All’armi siam Fascisti by Cecilia Mangini and Lino Del Fra (1962), La via del petrolio by Bernardo Bertolucci (1965), Bronte. Cronaca di un massacro by Florestano Vancini (1971), The Assassination of Trotsky (1972) and Mr. Klein (1976) by Joseph Losey, Padre Padrone by Paolo and Vittorio Taviani (1977), Sud e Magia on the figure of Ernesto De Martino (1978).

With the support of Fondazione Giorgio Cini, Venice