In Rome, texts, words, and names, from antiquity through to the present day, constitute a multifaceted web of language disseminated across the urban landscape. Monumental words set in stone coexist with ephemeral messages (written on walls and other surfaces), generating a graphic panorama which can be understood as a place of sedimentation, an itinerary where complex histories and the present intertwine and can be observed from different angles. The spectres of these polyphonic voices, irreverent gestures, words in which to believe (or not), declarations of love, and ideologies, never cease to haunt us. 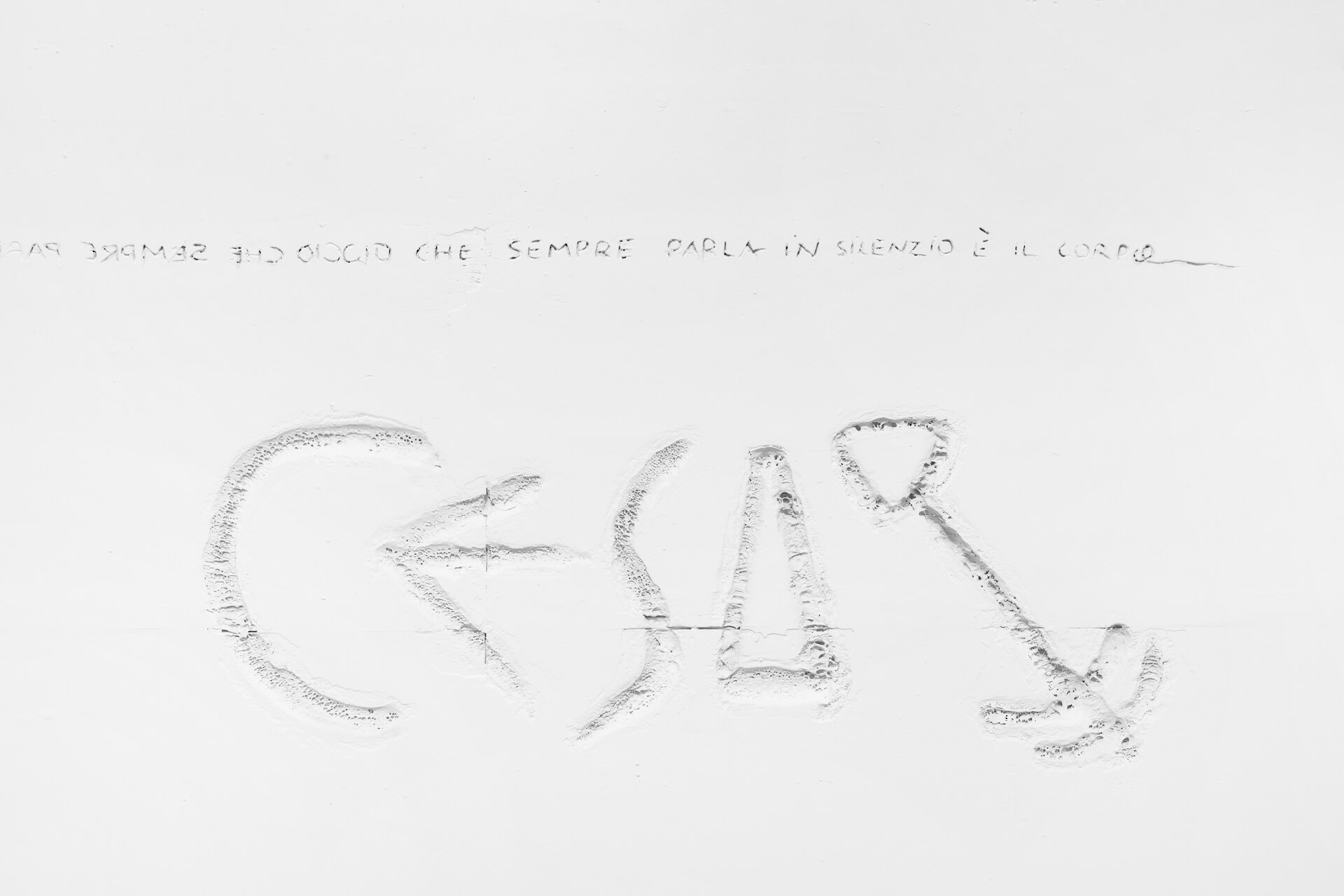 Swiss designer Julia Born is interested in different forms of writing as means of expression. She has collected graphic fragments from across the city of Rome, transforming the walls of the exhibition space into a monumental display of found, official or unauthorized, inscriptions, marks, tags, footprints, scribbles, and drawings. Sculpted words conjugate heterogeneous time frames on the same surface, in conflict or combined into an everactive constellation.

In the presence of words, we stand, facing the passing of time, before them we recognize, with a certain humility, that they will survive, while constantly reconfiguring themselves. But what kind of time or times are we facing? Language is ephemeral and always in motion. “To set something in stone” means to make it immovable and immutable, not timeless. In order to underline this paradox between the eternal and the temporary, historically significant names, words and texts are accompanied by mobile traces from Rome’s landscape, such as storms of birds or the cracks one trips over on the sidewalks of the city.

The words gathered reflect the designer’s subjective gaze and are not representative of the entire history of the city and the transformations it has undergone. Rather, it is a montage of vocabularies intended to expose the power of the written word or the attribution of a title and the ownership of a place, the relationship between power and public space, and ultimately the desire to leave a trace. The title of the exhibition, All Capitals, emphasizes these themes through the selection of fragments written in capital letters.

In most cases the words are reproduced in their original dimensions and the writing on the walls overwhelms the visitor with its monumentality, at once creating a sensation of both distance and vicinity with the past. Extracted from their original contexts, the words transgress their primary meanings with the intent of inviting the audience to assume an alternating rhythm of positions. In one moment instinctive, by approaching the fragments as if they were transforming themselves into images; in another critically distant, by peering into their engraved and fractured monumentalities.

The exhibition is accompanied by a booklet that presents information on each of the selected verbal fragments. A section of the publication includes two short essays by Salvatore Lacagnina and Ari Ray.

With the support of Pro Helvetia.

Thanks to Istituto Svizzero.

JULIA BORN lives and works in Zurich. After completing her studies at Amsterdam’s Gerrit Rietveld Academie in 2000 she worked on various projects between Switzerland, Amsterdam and Berlin. Her work focuses on editorial design for a variety of cultural clients including the Stedelijk Museum and the Rijksakademie in Amsterdam, Kunsthalle Basel, ICA Miami, Guggenheim Museum New York, Hamburger Bahnhof, HKW and Brücke-Museum in Berlin, documenta 14 in Kassel and Athens. Her work, developed in close dialogue with institutions, curators and artists, includes publications, identities, exhibition design and more. Throughout her career she has continually collaborated with other designers and artists on investigative projects, with – among others – photographer Uta Eisenreich, fashion designer JOFF, and performance artist Alexandra Bachzetsis. These projects revolve around the subject of language and representation. Born regularly teaches graphic design at the Gerrit Rietveld Academie in Amsterdam and ECAL, École cantonale d’art de Lausanne, and is a visiting lecturer at international art and design institutes. On the occasion of the Inform Award for Conceptual Design, she produced her first solo show and the catalogue Title of the Show, at the Galerie für Zeitgenössische Kunst Leipzig, Germany. In 2021 she received the Swiss Grand Award for Design.