Autoritratto come Salvo is a polyphonic compendium of works that offer an overview of the complex figure of Salvo. Born at Leonforte in the province of Enna, the artist moved to Turin in 1956, where he began to conduct more conceptual research, thanks to his direct contact with personalities active within the Arte Povera movement, as well as artists like Sol LeWitt, Robert Barry and Joseph Kosuth. 1973 marked Salvo’s return to painting, a practice he had explored in the very first years of his education. At the start of the 1970s, this could be seen as an unconventional choice, moving against the artistic currents of the time. The central concerns of his work, such as the relationship with tradition and the past, the re-examination of art history, and a partially self-absorbed focus on his own person, were expressed in a more solidly during the second phase of his career, which lasted until his death in 2015. 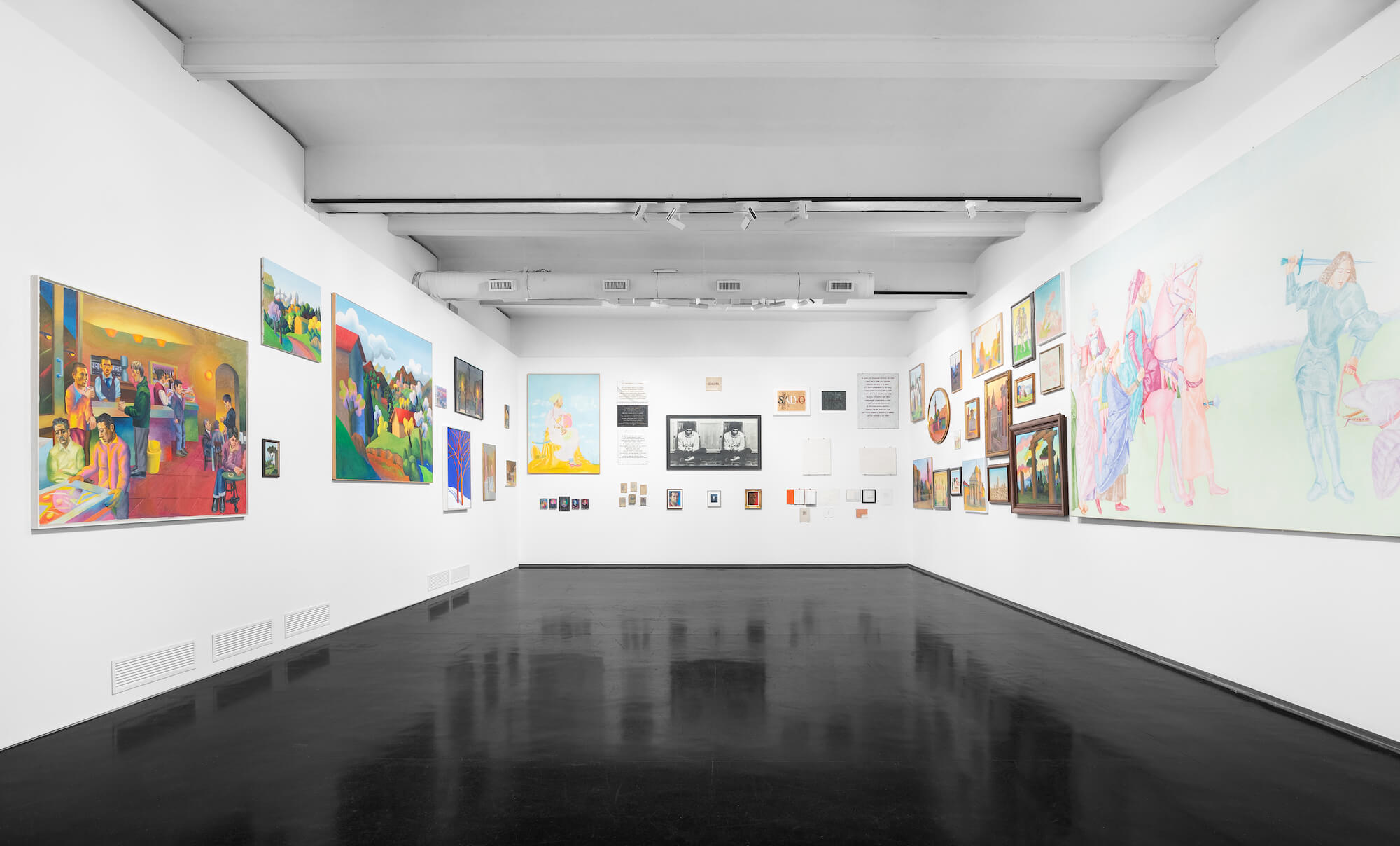 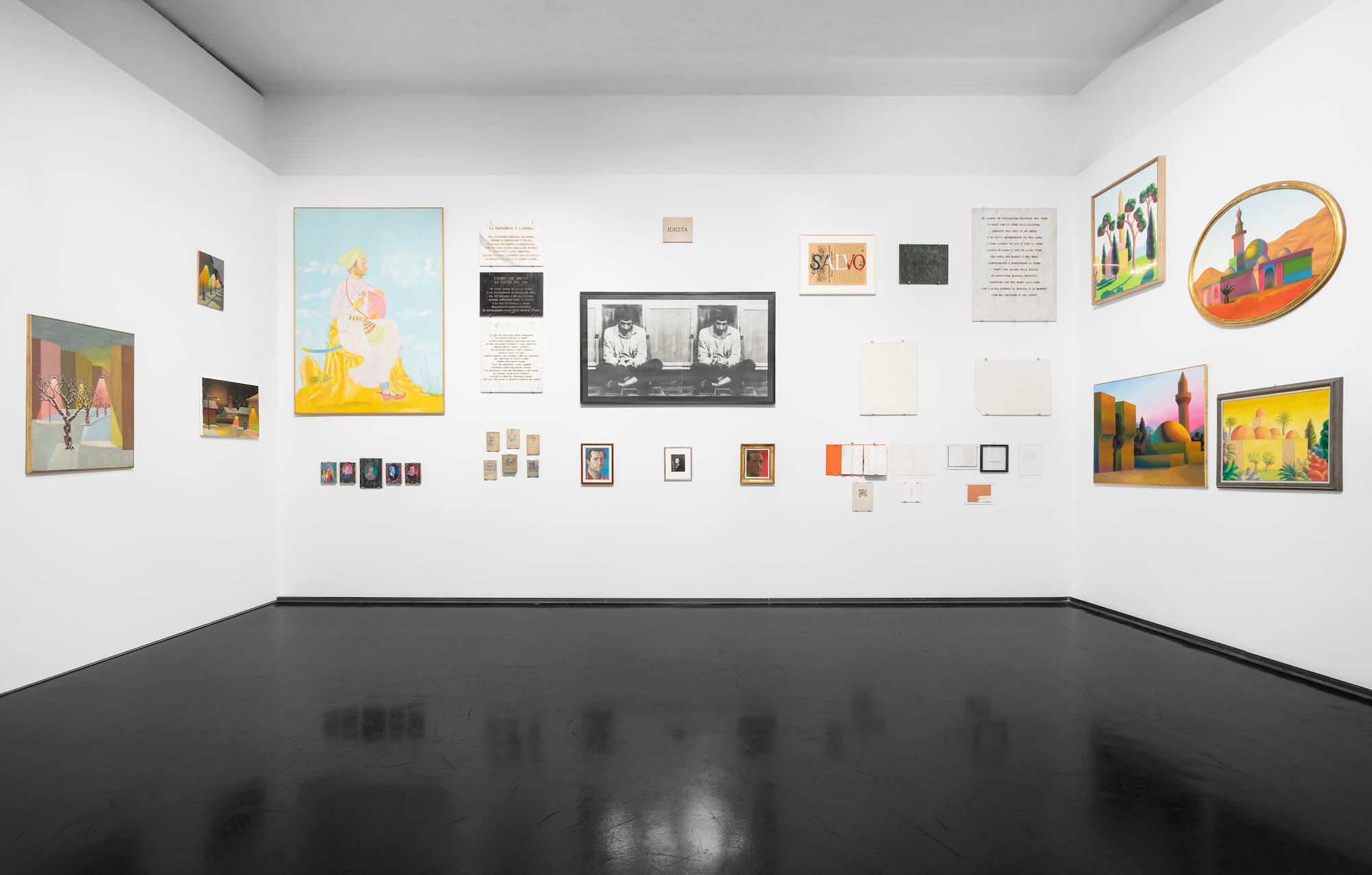 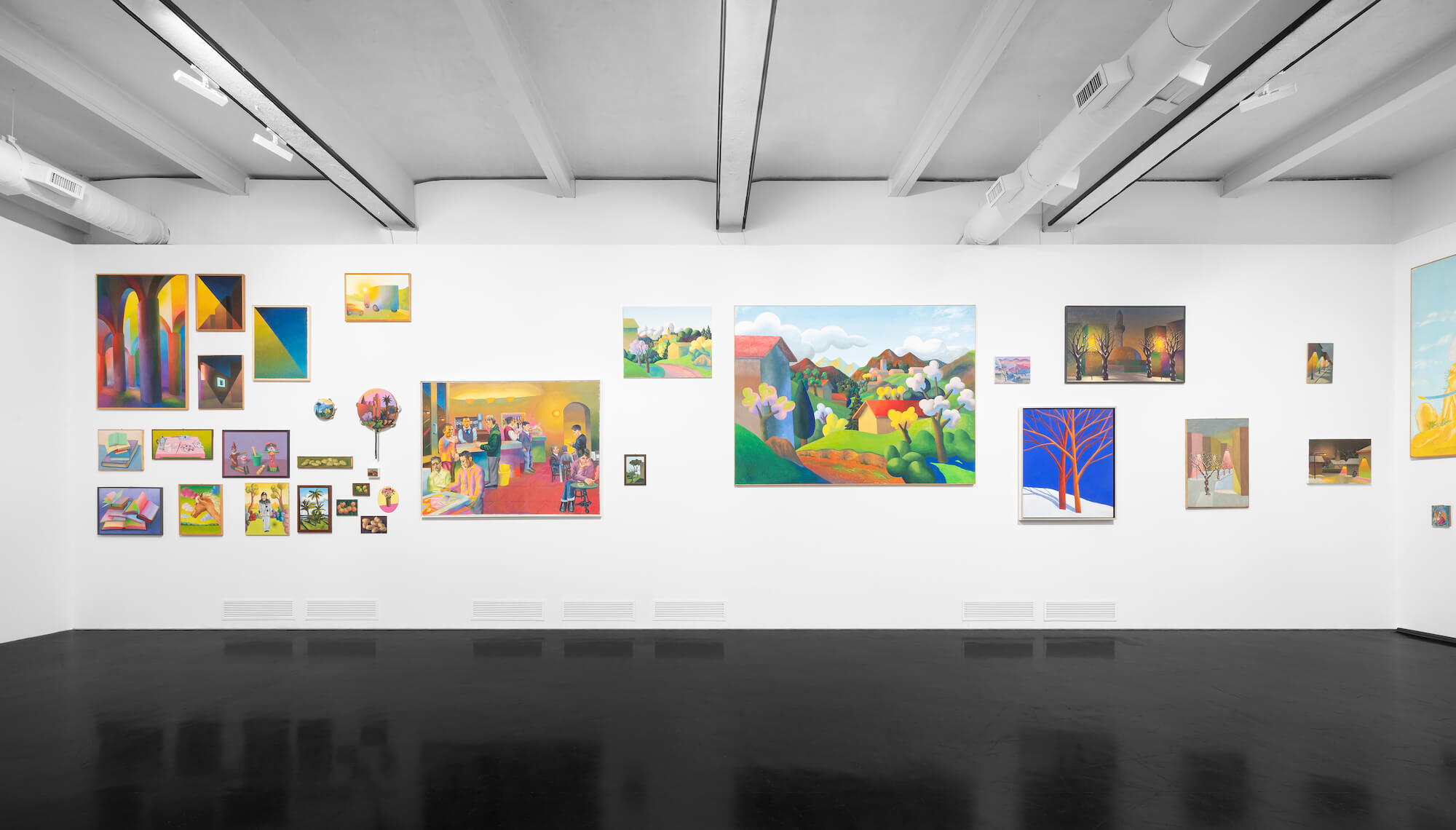 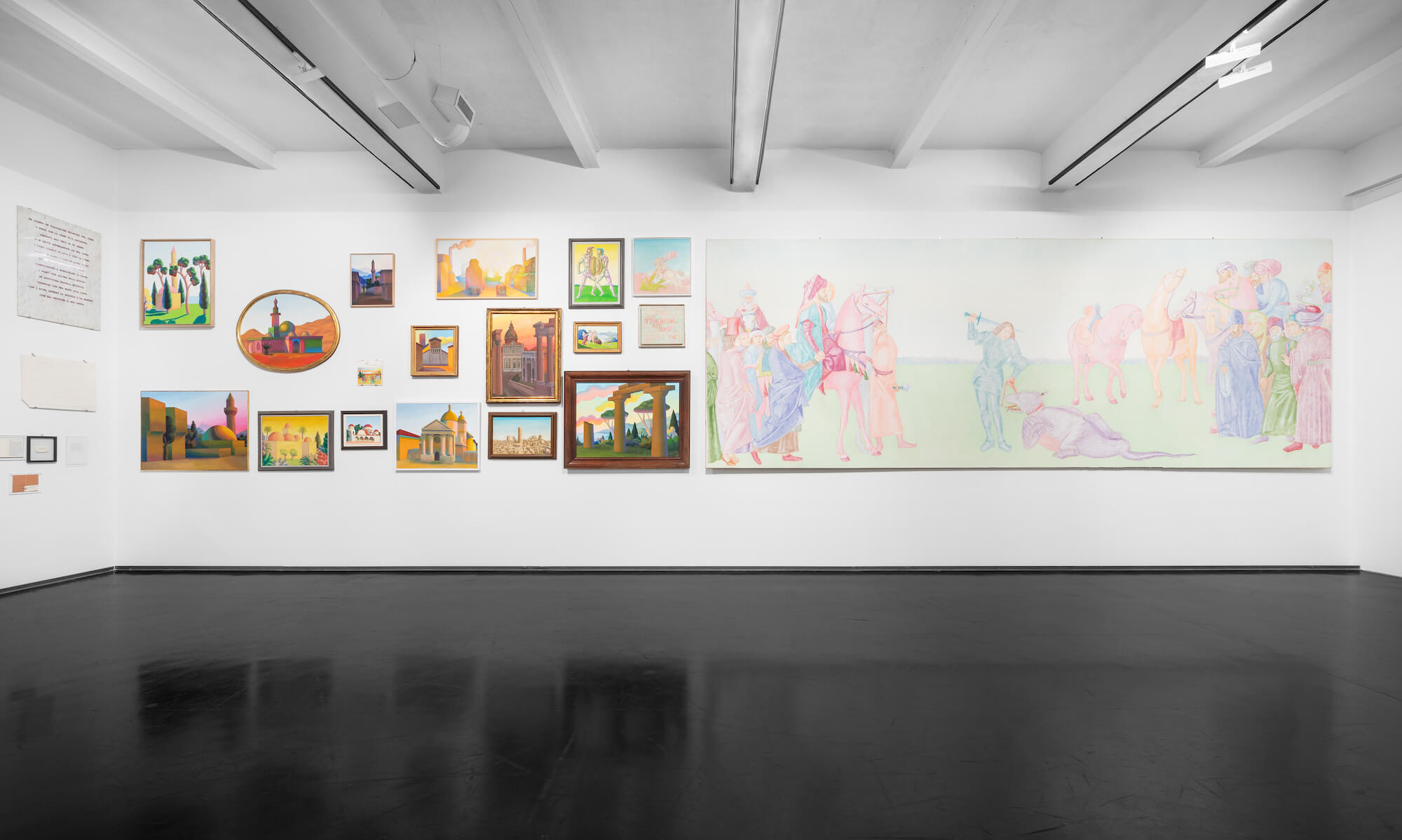 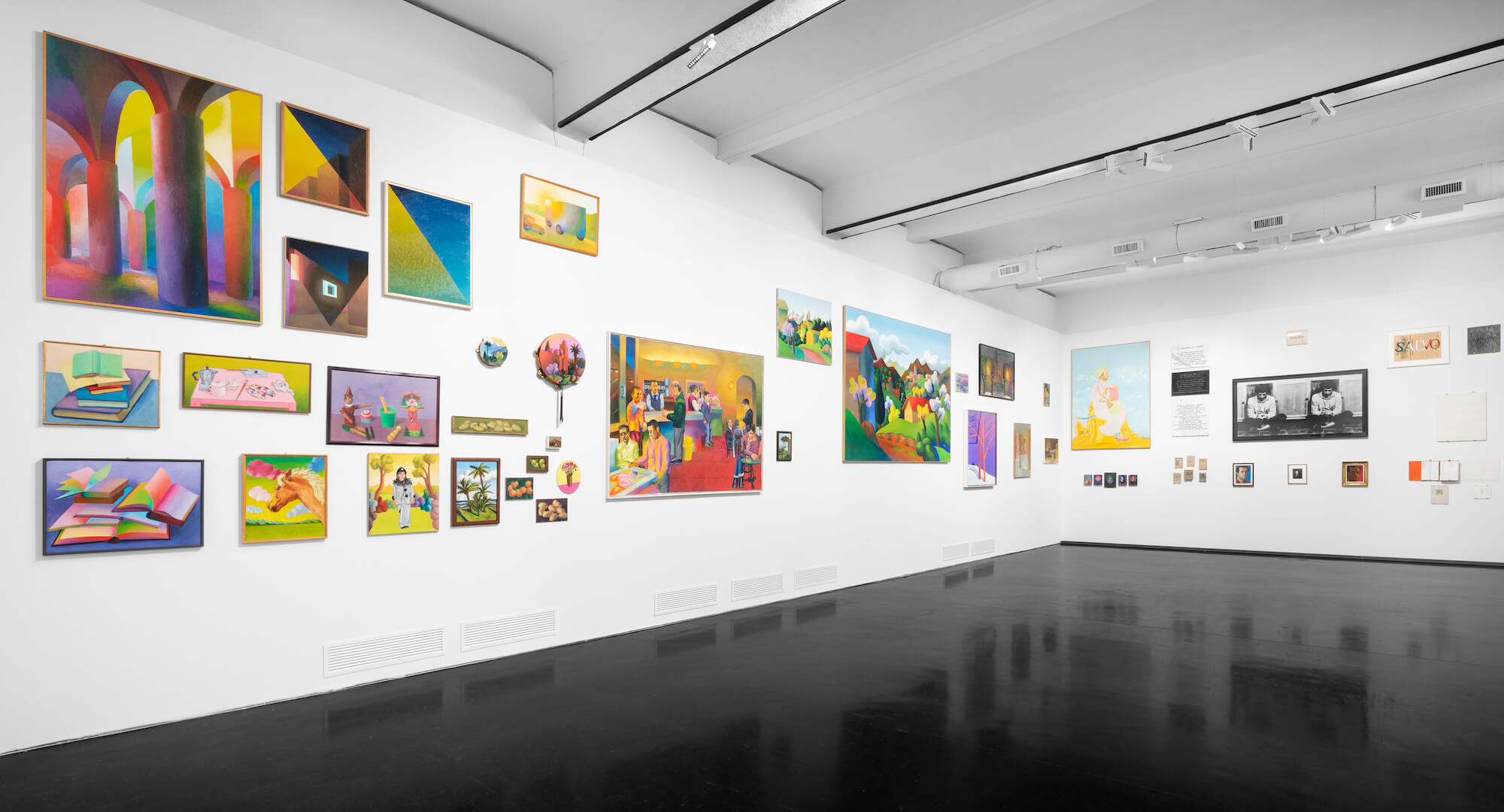 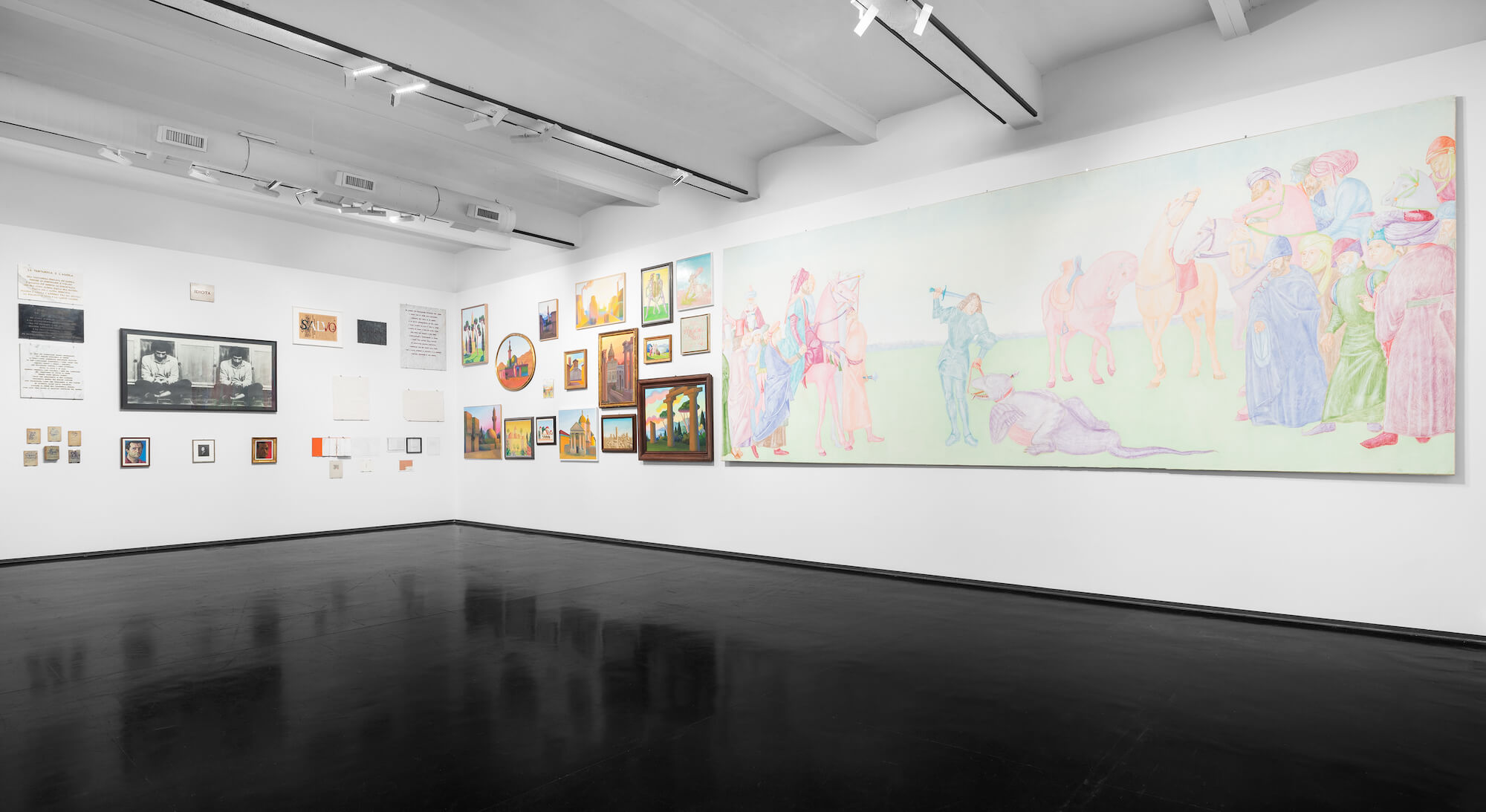 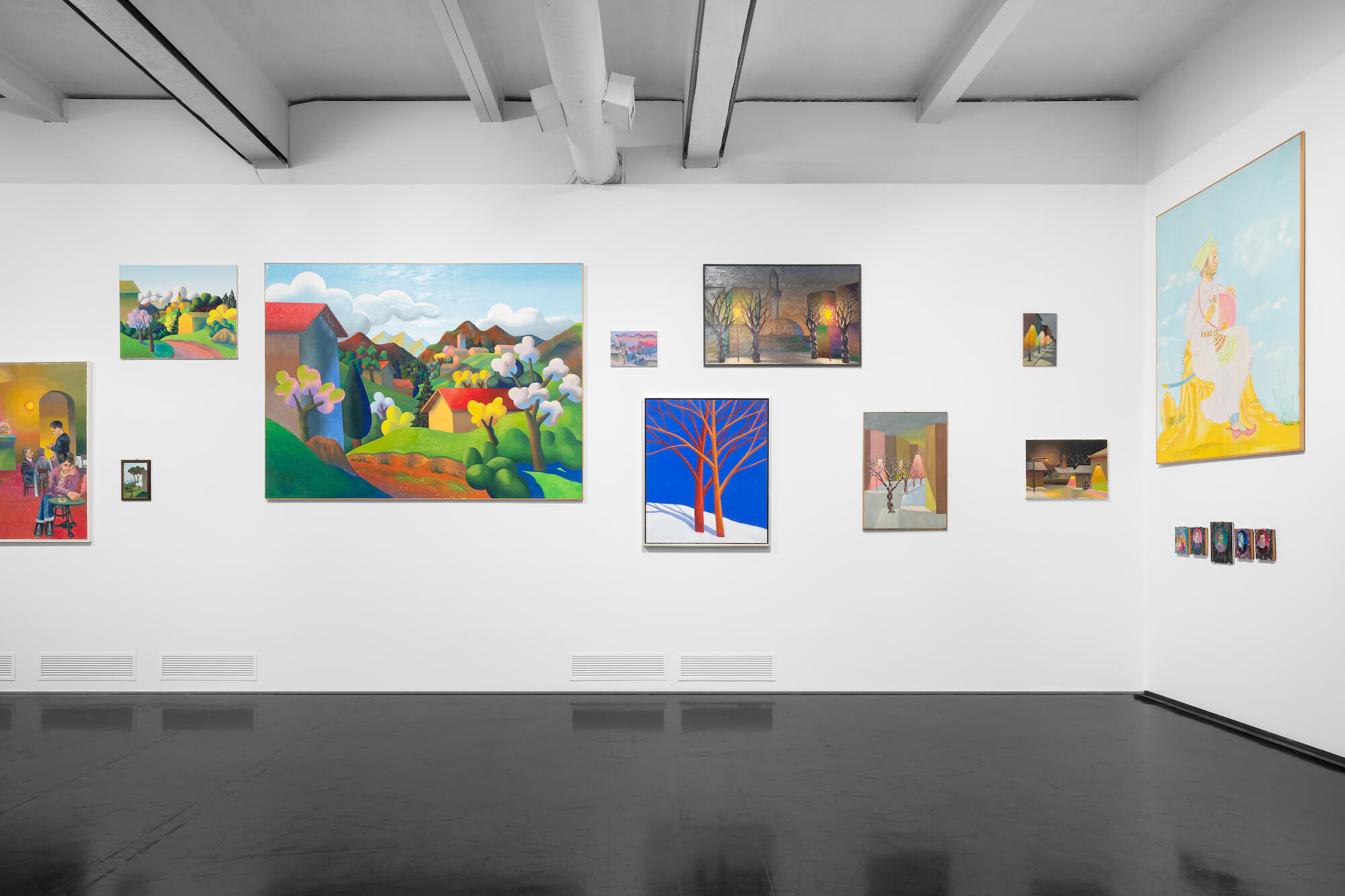 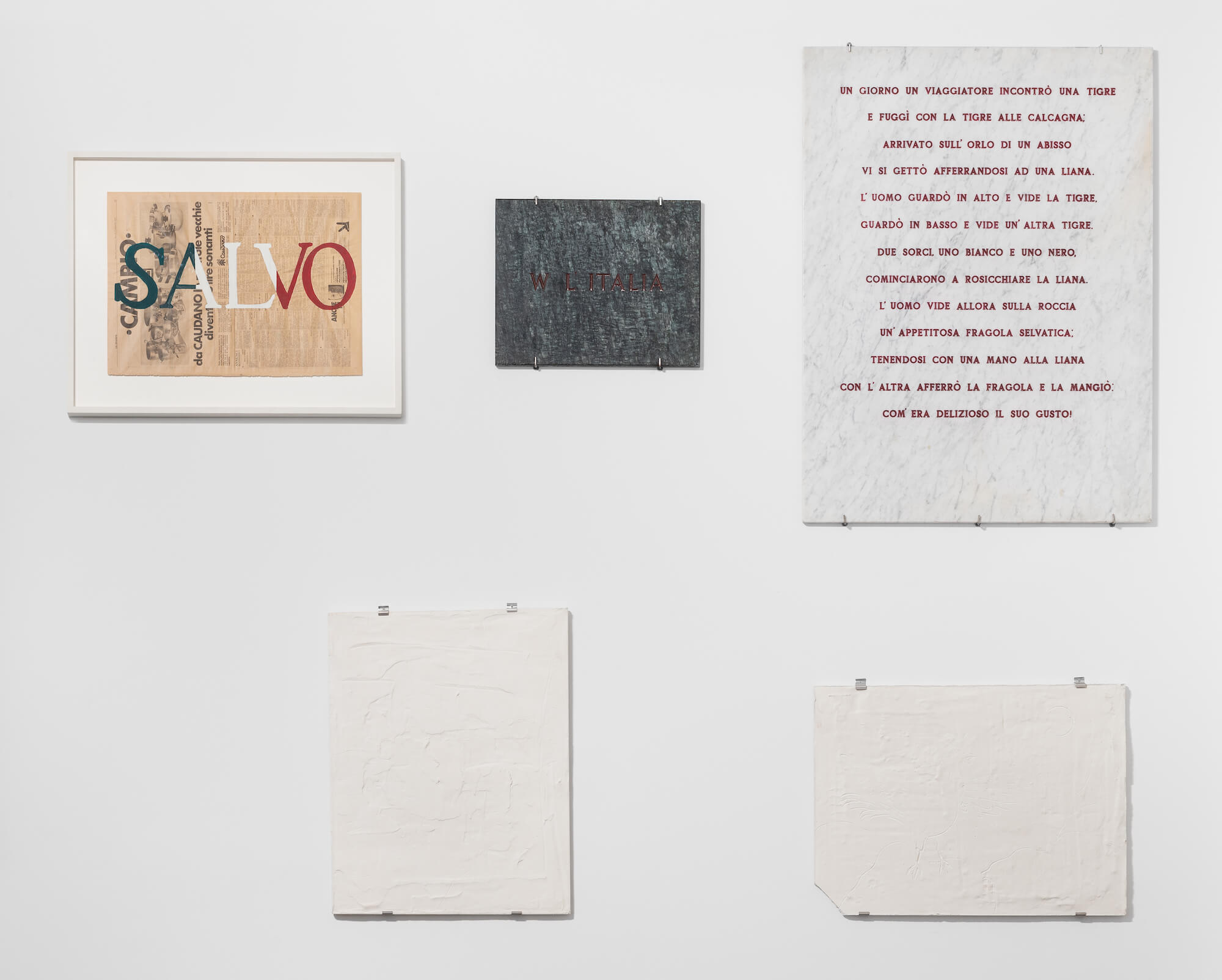 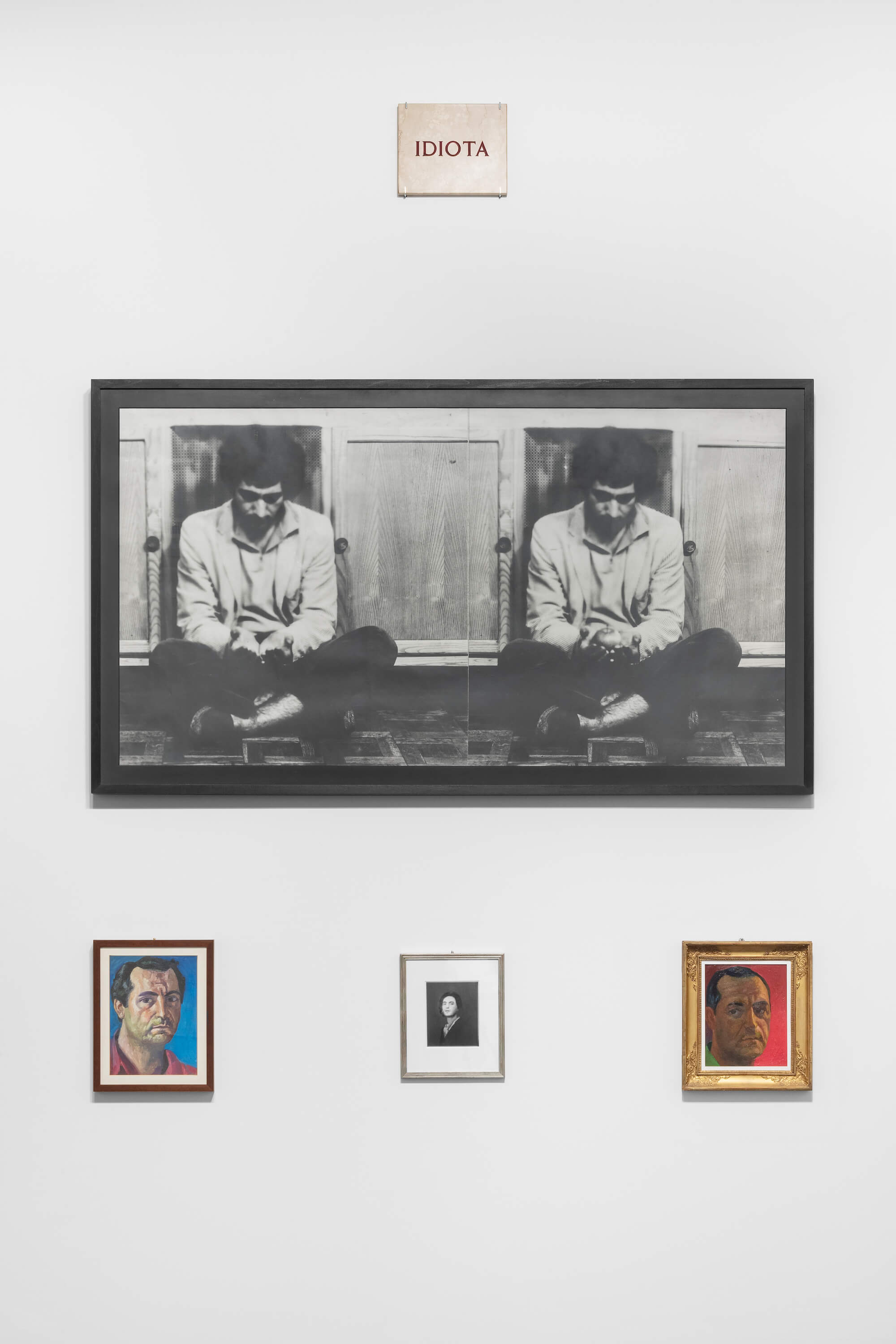 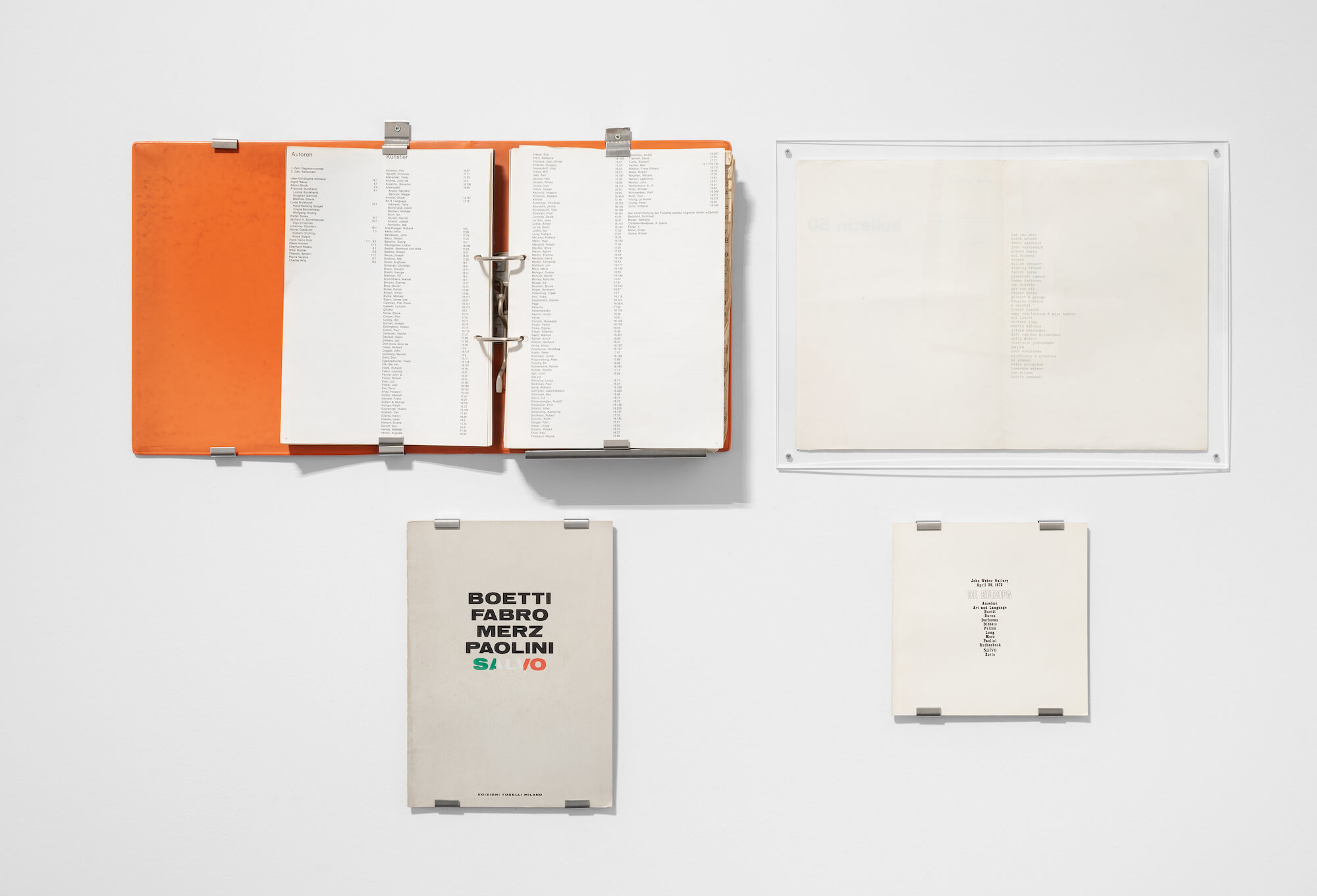 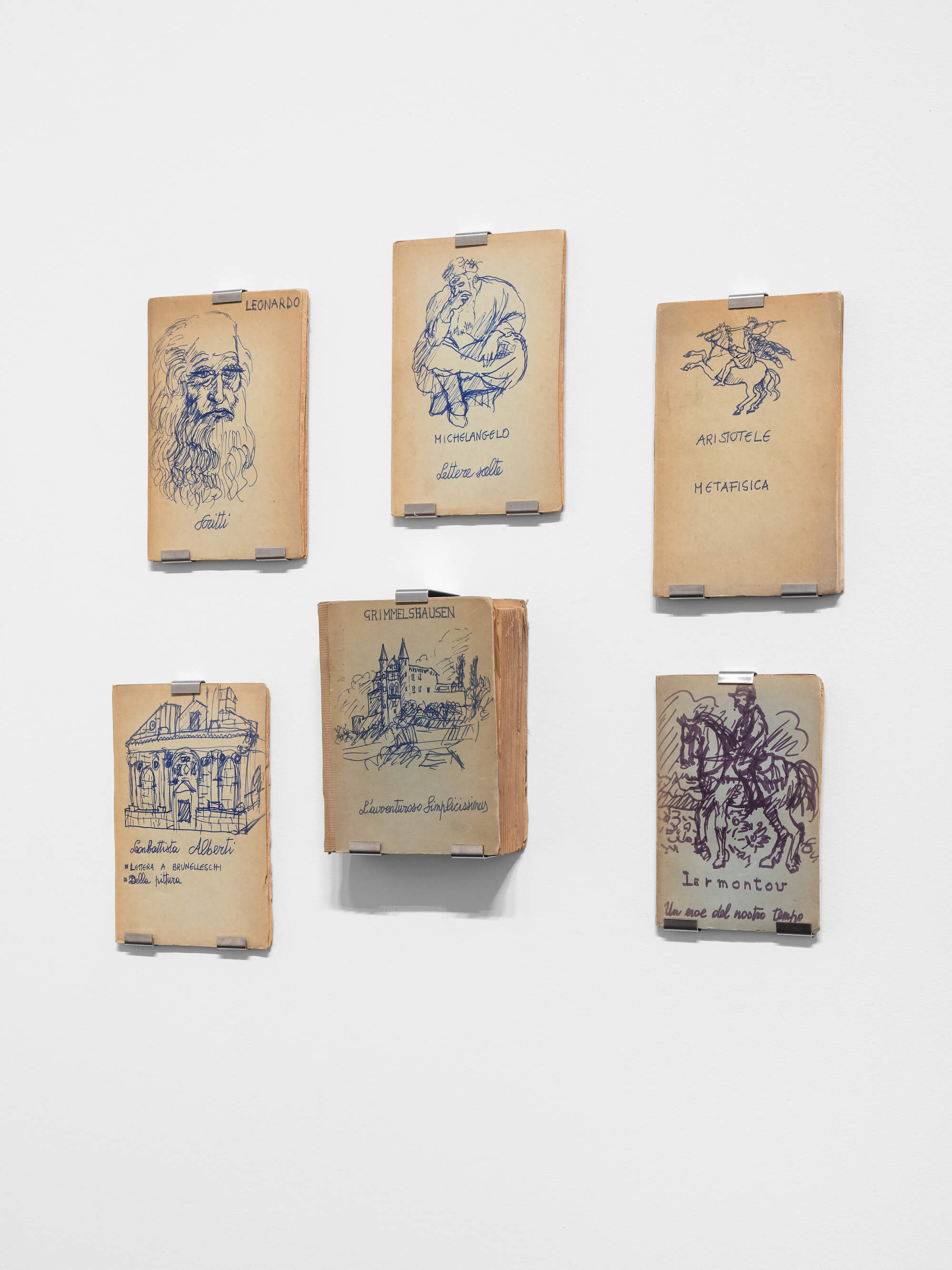 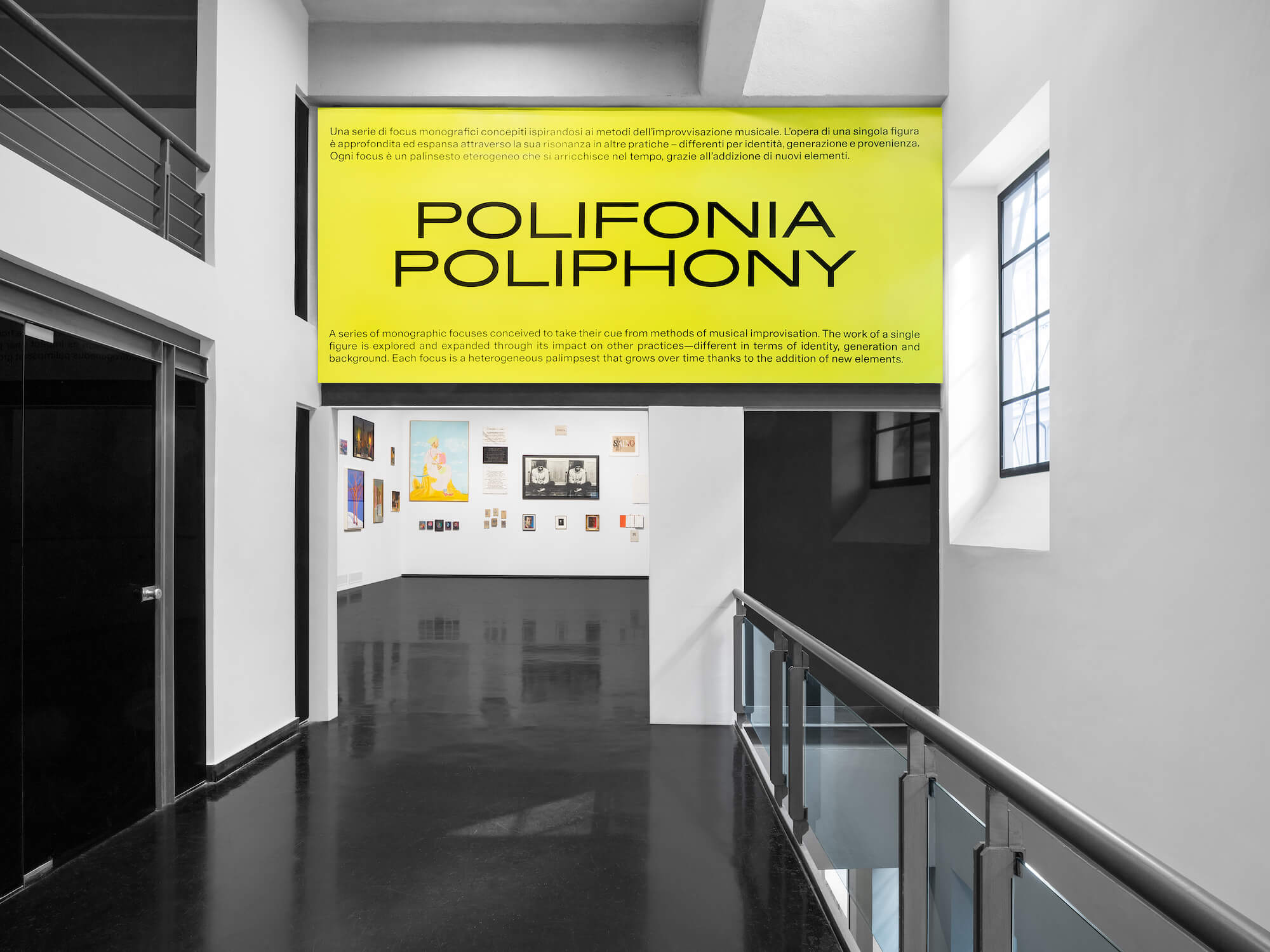 The exhibition project, which playfully takes its cue from one of Salvo’s best known works, Autoritratto come Raffaello, offers an extensive overview of his production in the context of a large picture gallery. The arrangement on the walls follows an irregular temporal pace, inserting works by artists Jonathan Monk, Nicolas Party and Nicola Pecoraro, while the sound performer and musician Ramona Ponzini will offer her own personal interpretation of the show.

The works that Nicola Pecoraro presents in the exhibition are part of a wider range of experiments involving drawing through engraving. As an approach to painting, the artist inscribes figures on layers of color that have not yet dried. It is a way to paint while maintaining the speed and immediacy of the drawing, gestures become irreversible as errors cannot be corrected. These works create a visual appeal with Salvo’s series of tombstones, some of which are on display in the exhibition.

Nicolas Party’s color palette, as well as the sample of figures he uses, are visually close to Salvo’s painting. His presence in the exhibition speaks of the ways and possibilities of passing on a figurative tradition that reflects Salvo’s research and that offers itself as an opportunity to talk about future generations of painters.

The work on display Salvo Tree Repetition (seven day cycle) is part of the large number of works of the series in which the artist prints images of Salvo’s landscapes, painting only the trees of the original composition. Monk focuses on the concept of repetition, looking at Salvo’s artistic research in a new and ironic perspective.

Trees are Columns with Clouds on Top (2019) by Ramona Ponzini is a vinyl as a direct tribute to the pictorial research dedicated to light in the artist’s painting. Using a combination of singing and a particular use of field recordings, collected from 2004 to 2019 in Japan and in international museum contexts, Ramona Ponzini composed the vinyl interpreting in a musical key both the creation and fruition phases of Salvo’s great painting L’autogrill (2014). On the occasion of the exhibition, starting from the vinyl itself, a live performance will be created.

NICOLA PECORARO (Rome, 1978) lives and works between Rome and Vienna. His research is characterized by a heterogeneous production in terms of media and forms, but always following a common thread: the idea of the work as a by-product or a doss of a chain of events, whether physical or mental. Recent solo exhibitions was made at Fondazione Brodbeck, Catania (2019); Museo d’Arte Contemporanea Villa Croce, Genoa (2017); Kunst Merano (2017); collicaligreggi, Catania (2017); Ermes-Ermes, Rome (2016).

JONATHAN MONK (Leicester, 1969) lives and works in Berlin and Rome. He revises and re-examines seminal works of Conceptual and Minimal art by curiously witty, ingenious and irreverent means. “I realized that being original was almost impossible, so I tried using what was already available as source material for my own work” (JM, 2019). Monk presented solo shows in various institutional spaces, among them: CCA Tel Aviv, Israel (2019); The Gallery at De Montford University, Leicester (2017); Kunsthaus Baselland, Basel/Muttenz (2016). Among his recent group exhibitions: Points de Rencontres, Centre Pompidou (2019); Manifesta 11, Zurich (2016); the 50th and 53th Venice Biennales (2003, 2009); Berlin Biennial (2001); Taipei Biennial (2000).

RAMONA PONZINI’s practice is inscribed in a hybrid territory: techniques from both visual and literary arts, such as collage or Burroughsian cut-up, are combined with sound experimentations and improvisation in a noise and jazz style. Over the years, Ponzini has collaborated with figures such as Lee Ranaldo of Sonic Youth, Tom Greenwood of Jackie-O Motherfucker, and with industrial percussionist Z’ev. Her solo project consists of unusual DJ sets contaminated by vocal interactions and sound collages. In 2016 she founded, together with curator Matteo Mottin, Treti Galaxie, a contemporary art project that organizes exhibitions of young emerging artists.