Four Musical Procedures is an exhibition devoted to Presto!?, Milan based experimental record label characterised by a rules-breaking perspective and a keen dialogue with contemporary art and design practices. 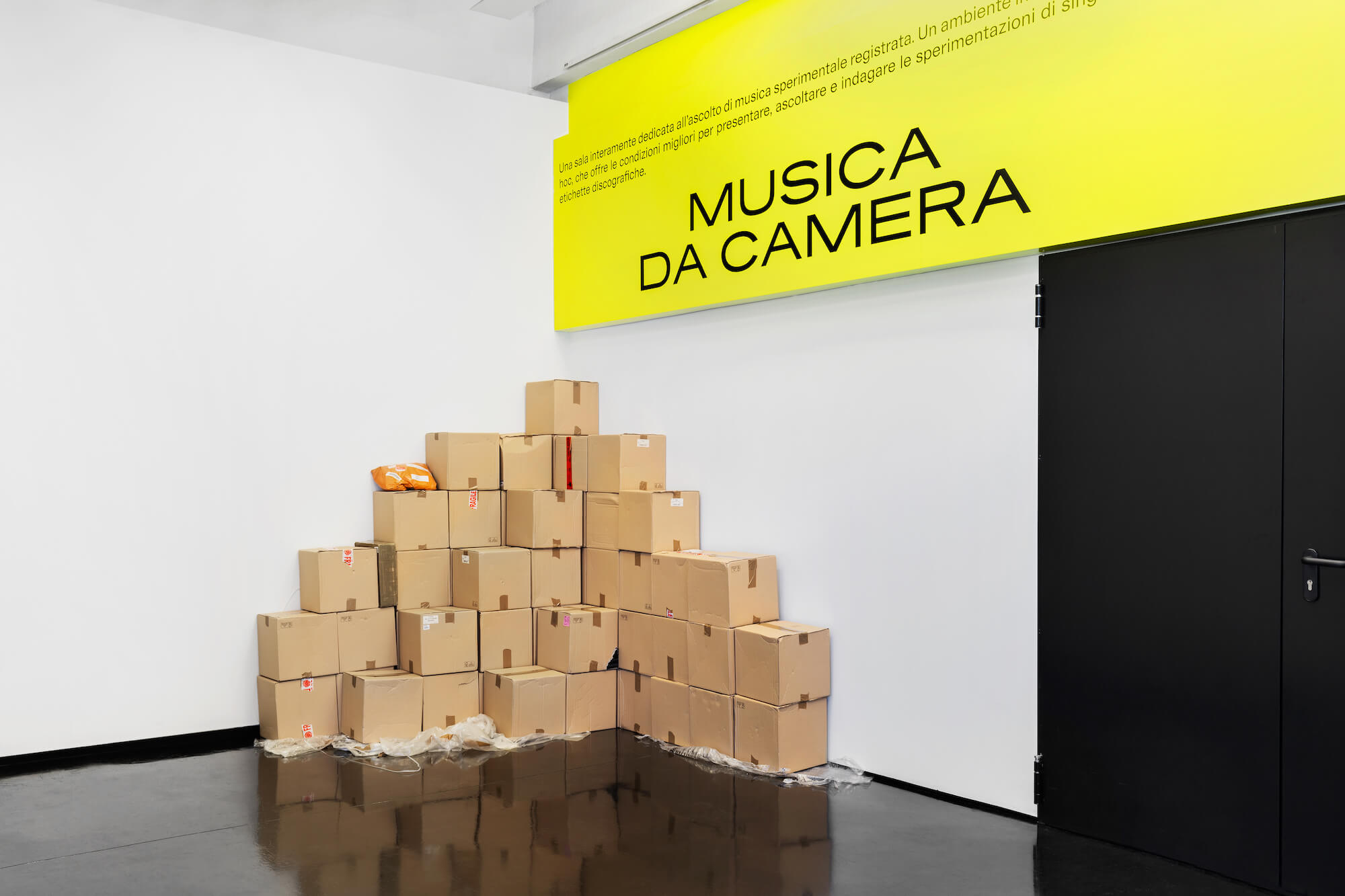 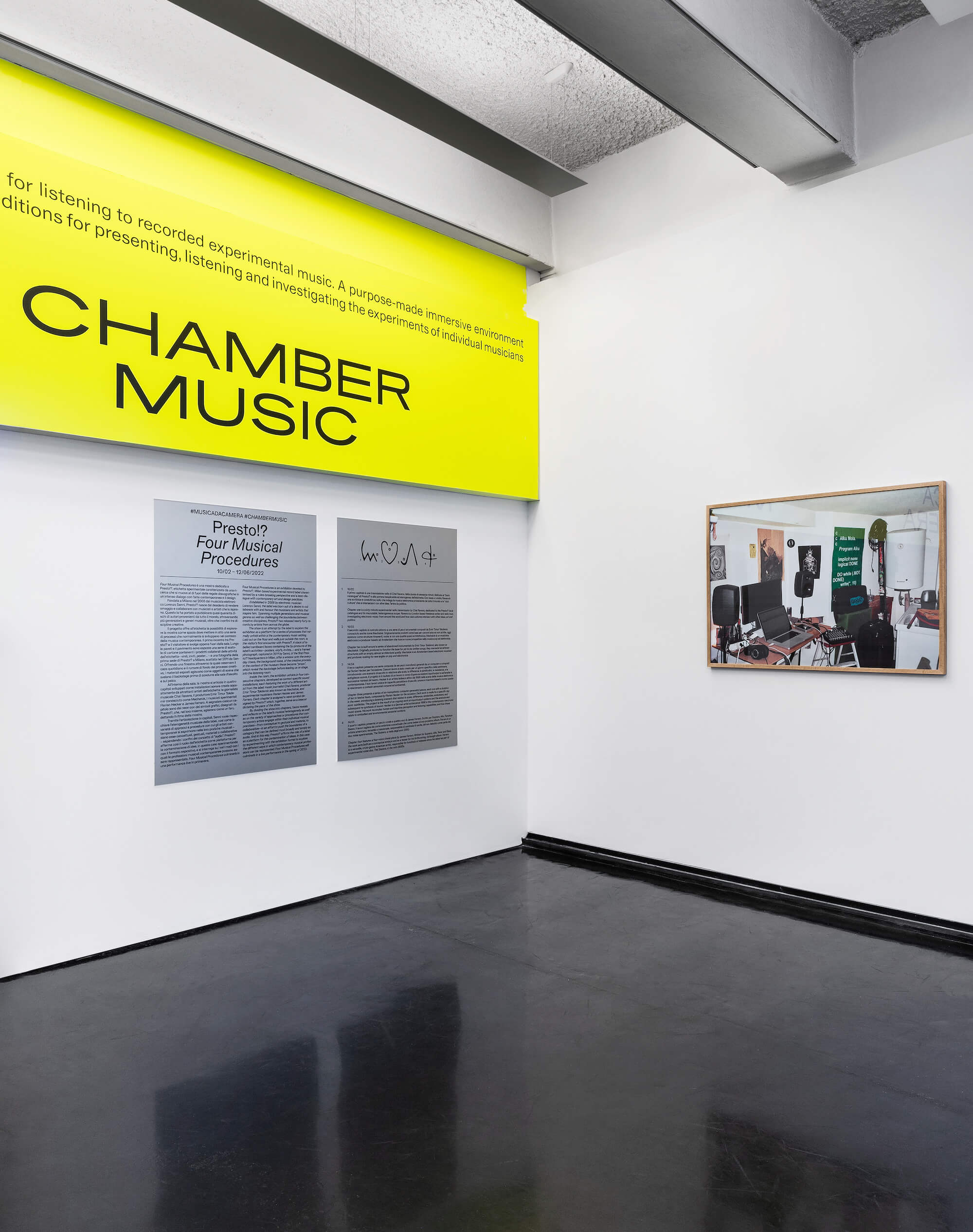 Established in 2008 by electronic musician Lorenzo Senni, the label was born out of a desire to collaborate and honour the musicians and artists that inspire him.  Spanning multiple generations and musical genres as well as challenging the boundaries between creative disciplines, Presto!? has released nearly forty records by artists from across the globe.

The show is an attempt by the label to explore the exhibition as a platform for a series of processes that normally unfold within a contemporary music setting. Laid out on the floor and walls just outside of the listening room, is the visitor’s first encounter with Presto!?. A stack of labelled cardboard boxes containing the by-products of the label’s activities—posters, vinyl’s, invites…—and a framed photograph, captured in 2011 by Senni, of the first Presto!? headquarters in Milan, offer a window onto the everyday chaos, the background noise, of the creative process. In the context of the museum these become “props”, which reveal the backstage before leading us on stage, into the listening room.

Inside the room, the exhibition unfolds in four consecutive chapters, developed as context specific sound installations, each featuring the work of a different artist from the label: music journalist Chal Ravens, producer Emir Timur Tokdemir, also known as Mechatok, artist Florian Hecker and experimental musician James Ferraro. Each chapter is assigned a neon symbol designed by Presto!? which, together, serve as a beacon dictating the pace of the show.

By dividing the show into chapters, Senni reveals and reflects on the label’s musical heterogeneity as well as on the variety of approaches or procedures that contemporary artists engage within their individual musical practises—from conceptual to gestural and material, to collaborative—in an effort to push the boundaries of a category that can be defined most broadly and simply as audio. And in this way, Presto!? affirms of a label as a platform for the contamination of ideas, in this case by experimenting with the exhibition format to explore the different ways in which contemporary musical professions can be represented. Four Musical Procedures will culminate in a live performance in the spring of 2022. 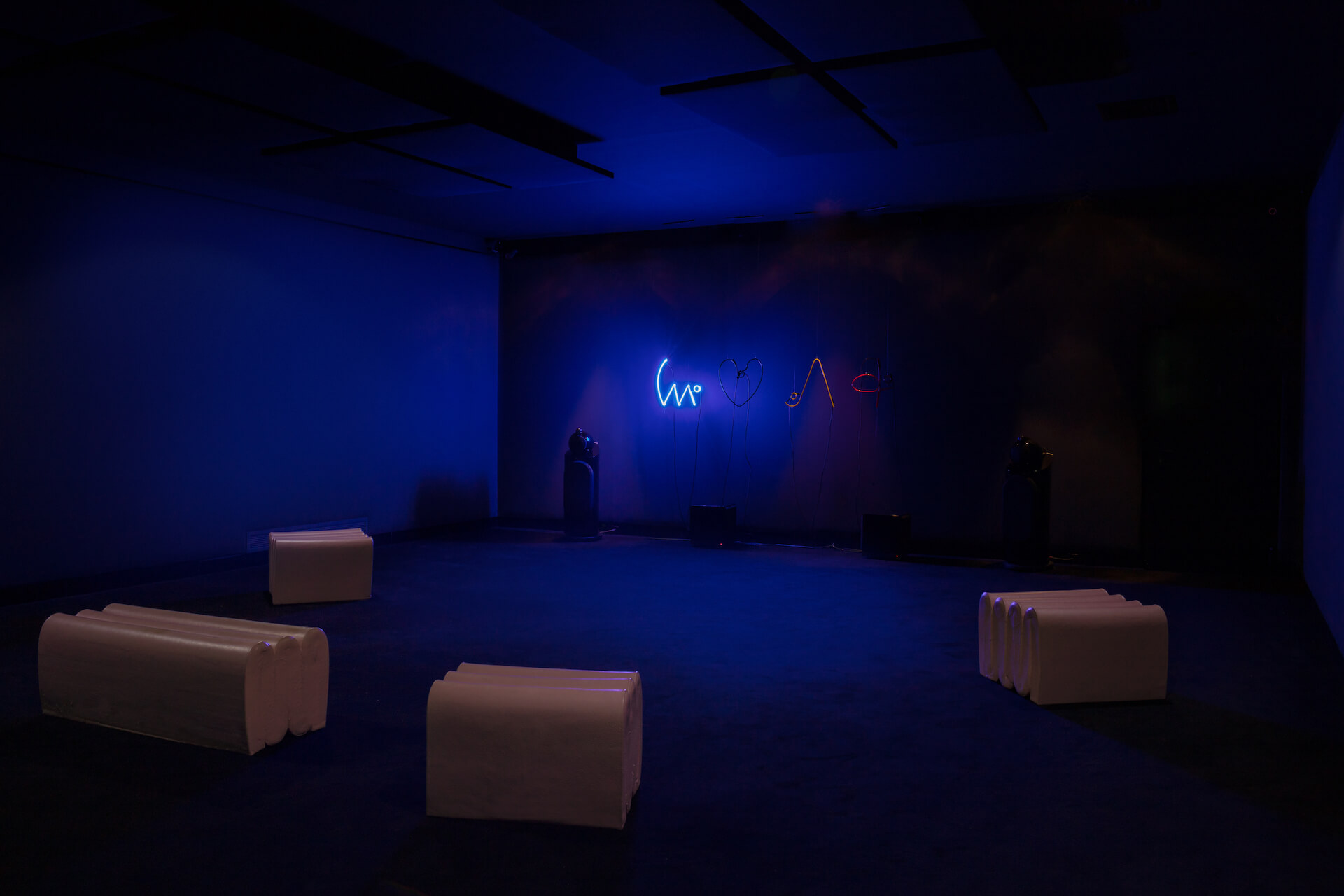 Chapter one is a sixty-minute experimental radio transmission by Chal Ravens, dedicated to the Presto!? back catalogue and its inscrutable, heterogeneous scope. Ravens is a London based freelance writer and radio host, investigating electronic music from around the world and how club cultures intersect with other ideas, art and politics. 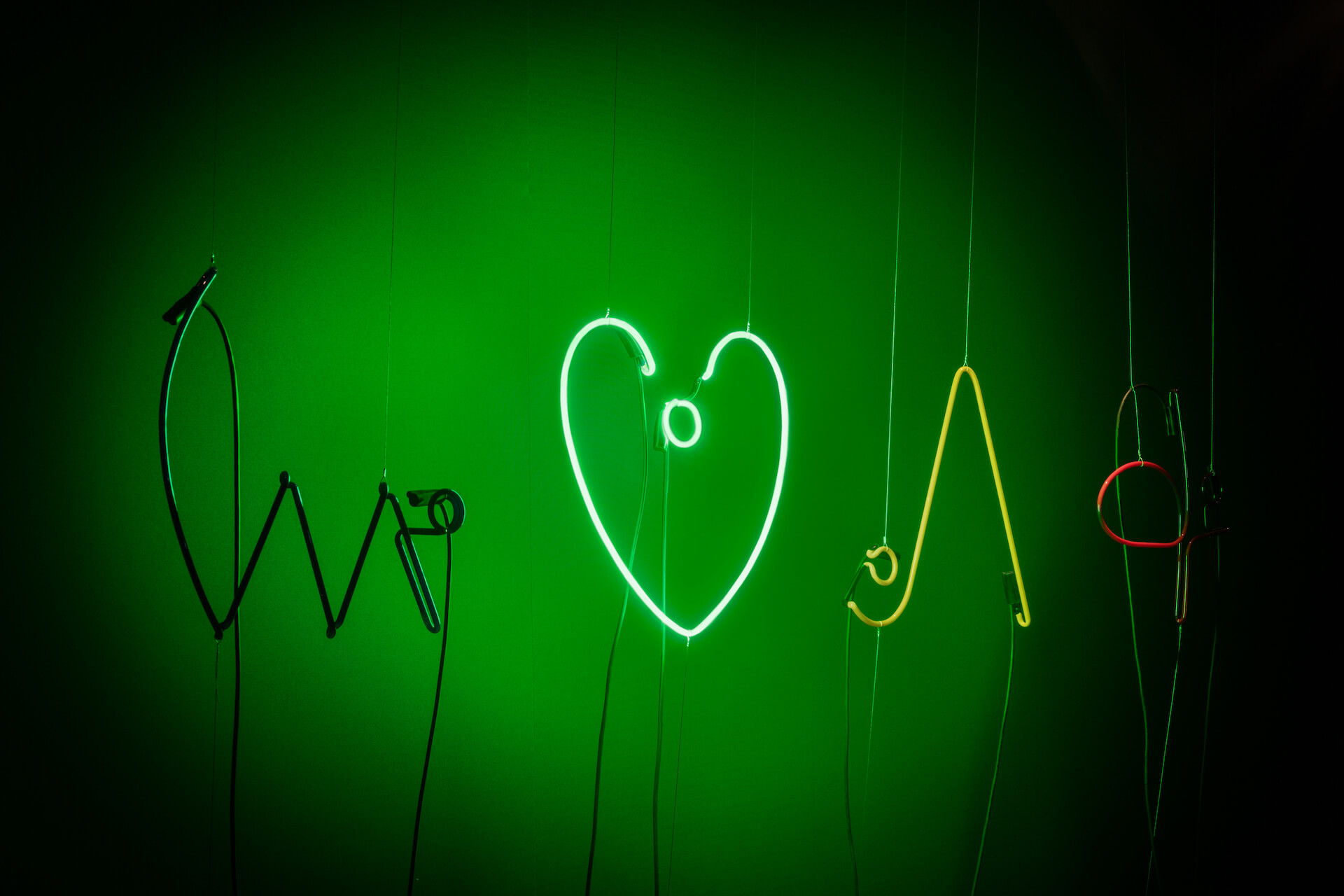 Chapter two is built around a series of abandoned instrumentals by Emir Timur Tokdemir, also known as Mechatok. Originally produced to function the base for yet-to-be-written songs, they now exist as leftover structures with an empty, almost architectural quality. Mechatok is an Amsterdam based electronic musician and producer, looking for new angles on pop electronica. 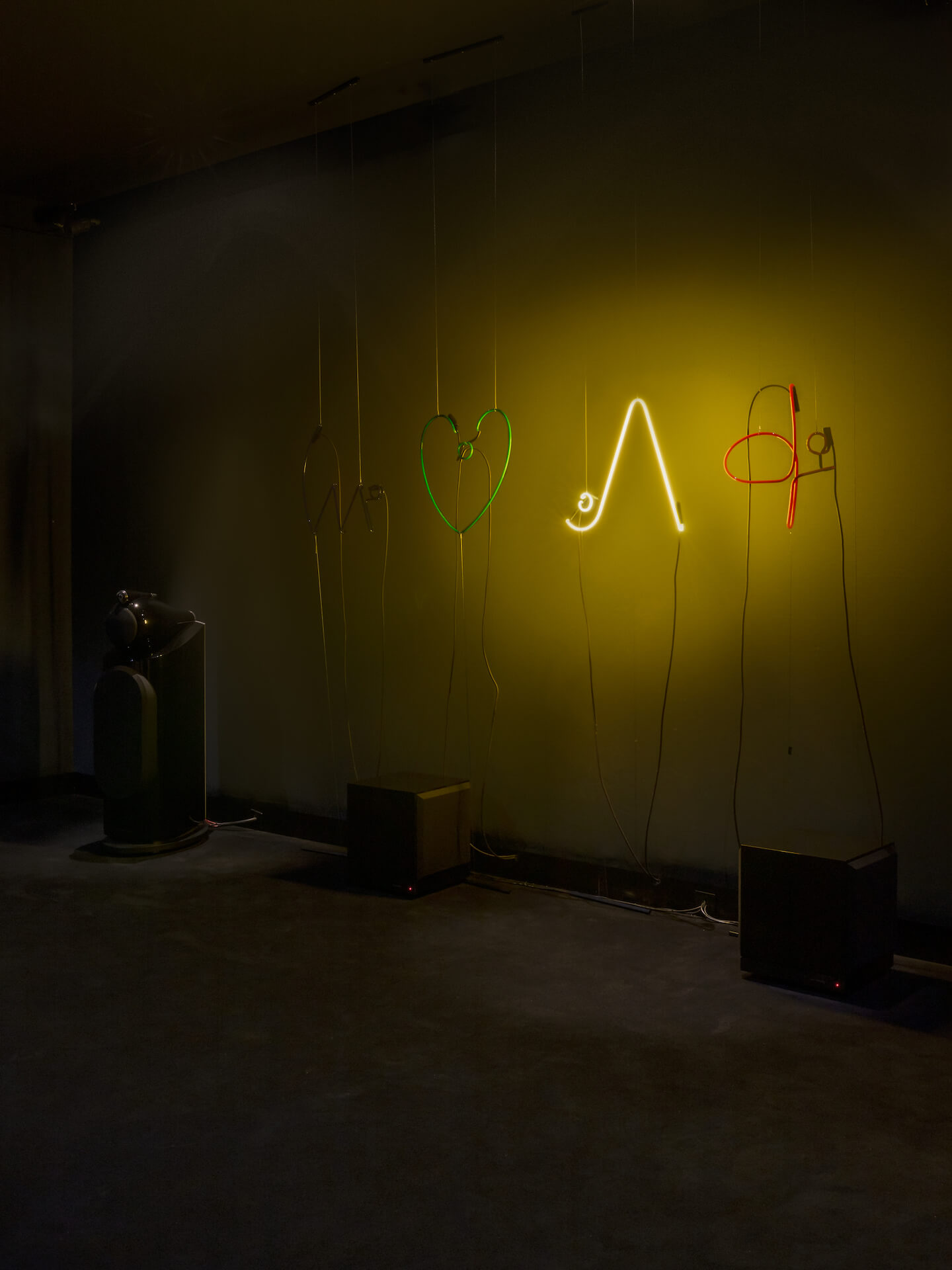 Chapter three presents a series of six monophonic computer-generates pieces, each one with a duration of ten to twelve hours, composed by Florian Hecker for the occasion. Each work is made for a specific day in the week, introducing a listening scenario that relates to scale, difference, similarities, endurance, and sonic subtleties. The project is the result of an ongoing work on input/output systems and the analysis and subsequent re-synthesis of sound. Hecker is a German artist active since 1996 in the contemporary electronic music scene. His work reconciles human and machine perception and listening capabilities, and how these relate to embodied and environmental sensorial contexts.

Chapter four features a four-voice choral piece by James Ferraro. Written for Soprano, Alto, Tenor and Bass, the work acts both as a conceptual embryo and as a teaser for his forthcoming, full length album. Ferraro is a versatile, cross-genre American artist, responsible for hundreds of releases since his debut as part of experimental noise duo, The Skaters, in the mid-2000s.

PRESTO!? is a Milan based experimental record founded by Lorenzo Senni in September 2008. From the start, Senni envisioned Presto!? as an international label and has since had nearly forty releases. Delivering both experimentalism and cutting-edge club sounds with equal reverence, the label has works with a wide variety of musicians including: John Hudak, Florian Hecker, DJ Stingray, James Ferraro, Caterina Barbieri, Theo Burt, Vipra, Gabber Eleganza and Triad God. With Polymorphism 27 x PRESTO!? in 2018 at Berghain, the label celebrated its tenth anniversary by taking over the Berlin club for one night. In 2019 Presto!? organized an evening of events in Milan’s Hangar Bicocca, entitled Positive Feedback.